Inflammatory Diseases of the Sinuses

Sinusitis or Rhinosinusitis is inflammation of the paranasal sinuses. It can be due to infection, allergy, or autoimmune issues. Most cases are due to a viral infection and resolve over the course of 10 days. It is a common condition. There are two types, acute and chronic. Acute sinusitis is very common. Roughly ninety percent of adults have had sinusitis at some point in their life. Headache/facial pain or pressure of a dull, constant, or aching sort over the affected sinuses is common with both acute and chronic stages of sinusitis. Treatment can be conservative or by Endoscopic Sinus surgery.

Tumors of the Nose and Paranasal Sinuses

Tumors of the nasal cavity proper are approximately evenly divided between benign and malignant neoplasia, with inverting papilloma predominating in the benign group and squamous cell carcinoma in the malignant. Up to 44% are attributed to occupational exposures, including nickel, chromium, isopropyl oils, volatile hydrocarbons, and organic fibers that are found in the wood, shoe, and textile industries. In addition, human papillomavirus can be a cofactor. Treatment is mostly by surgery followed by radiotherapy and chemotherapy. 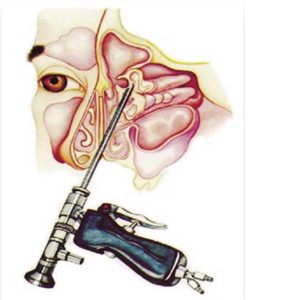 Functional endoscopic sinus surgery (FESS) is the mainstay in the surgical treatment of sinusitis and nasal polyps. FESS is a relatively recent surgical procedure that uses nasal endoscopes (using Hopkins rod lens technology) through the nostrils to avoid cutting the skin. Telescopes with diameters of 4mm (adult use) and 2.7mm (pediatric use) and with a variety of viewing angles (0 degrees to 30, 45, 70, 90, and 120 degrees) provide good illumination of the inside of the nasal cavity and sinuses. High definition cameras, monitors and a host of tiny articulating instruments aid in identifying and restoring the proper drainage and ventilation relationships between the nose and sinus cavities. All the sinuses can be accessed at least to some degree by means of this surgery: The frontal sinuses located in the forehead, the maxillary sinuses in the cheeks, the ethmoid sinuses between the eyes, and the sphenoid sinuses located in the back of the nasal cavity at the base of the skull. 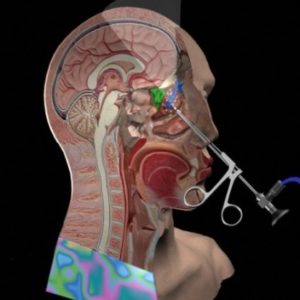